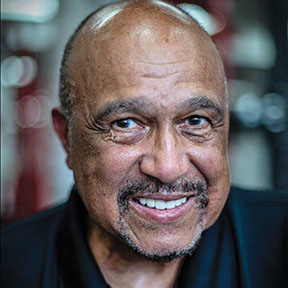 “There were certain places in College Park where we couldn’t go. There was a very popular place…I think it’s still there actually…called Town Hall, which was down on Route One. One day I went down there and they turned me away. And so my football teammates came back en masse and threatened to take the place down. But I said, “Look, it’s not worth it. They don’t want me I don’t want to go there.”

NARRATOR BIO:  Originally from Washington, DC, Darryl Hill transferred to the University of Maryland, College Park from the Naval Academy in 1962. Hill was the first Black football player at the university and he played from 1963-1965 before graduating with a degree in economics. Hill was a restaurateur and an international businessman before accepting a position as the Director of Major Gifts for Athletics at the university. He served in that role until 2010. Hill has been Interviewed by the Historymakers  and has been interviewed for countless news stories and features over the years.

My name is Francena Turner, and I am conducting an oral history interview with Mr. Darryl Hill for the Reparative Histories: The Black experience at UMD Oral History Project.

What is your hometown?

How would you describe your life prior to coming to UMD in terms of family composition, your home community, that kind of thing?

I’m a native Washingtonian, both of my parents are from DC. Father was a businessman. He had a trucking company. My mother was a secondary school teacher,  Howard University graduate, and a PhD from Catholic University. I grew up in far northeast Washington, sort of in a middle income, middle upper class Black community. The school I went to was adjacent to the community (it was a public housing project).  I went to school in the projects. That’s where I learned how to play sports and how to get tough. And from there, I went to Gonzaga High School, which is a Jesuit school in DC.

How did you make your decision to attend UMD?

It was a difficult decision. I was at the Naval Academy and I was a football player, along with Roger Staubach.  We decided we were going to  leave Navy. Maryland showed up one day and offered me a scholarship and to come visit the  campus, and I basically told them, “No, thank you. You’re in a segregated conference and why are you calling on me?” And Maryland said, “Well, that’s just the point. You know, we’re done with this segregation. And we think you’re the guy.” So Lee Corso was the assistant backfield coach at that time and I told him, I wasn’t trying to be Jackie Robinson.  I was gonna go to Notre Dame or Penn State. Then he challenged me. He said, “Are you scared?” He pressed the right button.  So I wound up going to Maryland. And that was a great decision.

What year was it that you enrolled in Maryland?

I enrolled in Maryland in 1962 and I had to sit out a year of football because I was a transfer from another school. So my first year in football at Maryland was 1963. I graduated with a degree in economics in 1965.

How did you decide on economics as a major?

I was talking with some friends of my father one day and I said, “What should I take where I could make the most money?” They said, “Take economics!” I said, “What’s that?” That’s how I decided.

If you could, walk me through your memories of the first time you walked onto campus as a transfer student.

My experience was a little different because I got to campus before everybody–before all the students enrolled–because we had football practice. So, there was not much to think of. For me to go to Maryland wasn’t a big deal because I had gone to an all white high school.  I went to the Naval Academy. So I was used to being in a severe minority. They were only 12 Blacks out of 4000 midshipmen. So, Maryland wasn’t a traumatic experience in the least. It was just there.