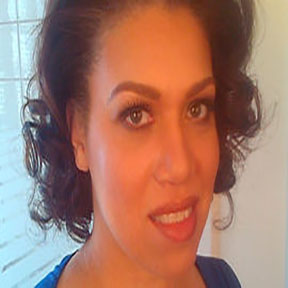 “Even though Black students were a minority at Maryland, we still are, I think, an even smaller one than when I was there. Because the university is so huge though, if you skip the percentages, and you actually take just the number of students, it’s enough to do stuff. It’s enough to have a step show. It’s enough to have some parties. It’s enough to congregate and feel like you can have moments where you’re surrounded by other people like you.”

NARRATOR BIO: Halima Aziza Jenkins came to the University of Maryland, College Park 1996 from Silver Spring, Maryland.  She graduated in 2000 with a degree in French and a certificate in Dance. She graduated from Johns Hopkins in 2010 with a Master’s in Writing. While a student at UMD, she was a member of the Caribbean Student Association, the Hispanic (now Latino) Student Association, and SEE Productions.  Jenkins also served as the copy editor for the Black Explosion newspaper and worked with the inaugural group of volunteers for the Saturday Freedom School. In addition to dancing in multiple performances, Jenkins also studied abroad for a year in France at what is now the University of Nice. After working as an editor for several years, Jenkins is currently an educator and freelancer  in writing, editing, and graphic design. She has published articles in Washington Independent Review of Books, Her Mind, The Change Agent, and Maryland Life.

My name is Francena Turner and I’m conducting an oral history interview with Halima Jenkins, a graduate of the University of Maryland College Park for the Reparative Histories: The Black Experience Oral History Project. Was your name at the time that you were at UMD Halima Jenkins?

Yes, I never changed it when I got married.

Where I live now? Or where I grew up?

Where you grew up.

For our first discussion, I’m interested in how you would describe your life prior to UMD in terms of your family composition and your family’s feelings and thoughts on education—that kind of thing.

Sure. In terms of my family, before I went to college, I grew up with my mom and dad, and I have a brother who’s two years younger, who also went to the University of Maryland College Park. My mom is a career teacher. She’s retired now. But I grew up in a house where education was highly valued. Both of my parents went to Macalester College in St. Paul, Minnesota. That’s where they met and got married. When I was really little–pre-K– before kindergarten, my mom stopped working when my brother and I were born and got her master’s degree in business administration, and then worked for a year in business, finance, marketing, and then decided to change gears to teaching. She liked that we would kind of be on the same schedule, have summers off together, holidays off together. She really, really is passionate about teaching. My dad got his master’s degree. He started when I was in high school, and he finished while I was in college. My dad’s parents were really highly educated, especially for a Black family back then. My parents were born in the early 1950s–his dad graduated from Howard University and his mom–my paternal grandmother–she’s from Calvert County, Maryland. His dad’s from DC–under segregation. She made it very clear to me many, many times that when she was graduating high school, the University of Maryland, College Park was not an option because it was still segregated. The option for Black students who wanted to go, of course, was University of Maryland, Eastern Shore. By the time I was accepted into the University of Maryland– especially with the Banneker-Keyes full scholarship–I heard many times about how different that was from her time, looking at 46 years later. My dad’s mother ended up getting her bachelor’s degree while my dad was in high school, and then she got her master’s degree right after that. She was a career teacher and retired a teacher. But in general, I’ll say, my family really highly values education so that was a very clear and constant message from the time I was very young, all the way through into the university.

How did you make the decision to attend UMD?

To be honest, I only applied to two schools. I applied to UMD and UMBC was the other one. And I thought about applying to Goucher  or some of the other private colleges in the state of Maryland, but for family reasons, I was only allowed to apply locally. I also knew that I was going to have to figure out how to pay for college because that’s something that my parents articulated. It was very clear to me that the private schools in Maryland were going to be very expensive and the in-state schools were going to be much more affordable. Of the ones that were in the University of Maryland system, College Park and UMBC were the only two really that I was interested in.  I focused on those two. Of the two, College Park was the one that I preferred over UMBC, and they offered me a full scholarship so that that kind of made my decision really easy.

what year did you enroll at UMD?

And, and then, did you come in knowing what you wanted to major in? And is that something you chose? Once you got there,

Can you walk me through your memories of the first time you walked onto campus as a freshman? What sticks out to you from that experience?

I think it’s worth saying, though, that my freshman year is not my first time walking onto campus. When I started as a freshman, I felt a sense of familiarity because I had been on the campus so many times before. I used the McKeldin library multiple times before, so there was a lot of excitement there. I remember feeling elated to be away from home and living in a dorm– actually being an enrolled student and using the libraries that I had already been using. I loved the McKeldin Mall. That was one of my favorite things about the campus, the way that it’s a big kind of grassy mall lined with trees on the side. One of the things I look forward to, and that I still have fond memories of, is in the fall when the leaves turn colors, and it’s lined with red, orange, yellow, green, and brown. I was excited for a new adventure. I remember feeling very proud to be there. Very appreciative of the opportunity to go to college, and be on scholarship. I could appreciate the contrast between my experience and my grandmother’s, at that time, being 18, and being able to go there. I had a very…I think…coming from at least on my father’s side, a family that’s been in Maryland for so many generations. I was very clear on the oral histories of segregation and afterward and what did that look like? And how are my opportunities different from just a generation before me, or two?