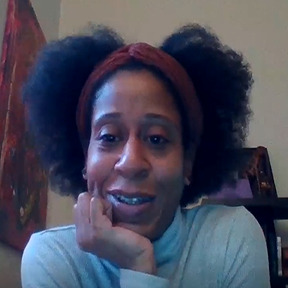 On generational understandings of attending UMD

“The institution officially desegregated in, what ‘54, ‘55, ‘56? My elders are old enough to remember that–the ones that were here. It’s funny. I had a great uncle at the time–rest his soul– he was just like, “I remember when they let Black folk step inside Cole Field House for the first time.” I was like, “Okay.” He was like, “So that’s crazy that you get to go there; good for you.”  Not shady. Very genuinely and sincerely. It was just always fraught, you know? POCs and Black folks always fighting for spaces and resources or egregious instances of racism on the campus or UMPD or PGPD wilding out on kids.”

NARRATOR BIO: Janell Quareless came to the University of Maryland in 2002 from Brooklyn New York and graduated in 2006  with a degree in psychology and a minor in Black women’s studies. Quareless worked in policy and advocacy for Feminist Majority Foundation in DC for almost a decade and has worked with the Working Families Party in NYC since 2014. While at UMD, Quareless was a resident assistant and active in Feminists at Maryland (FAM).

So to begin with, my name is Francena Turner and I’m conducting an interview for the Reparative Histories and the Back Experience at UMD Oral History Project. Could you pronounce your first and last name for me?

Was  Quareless your last name when you attended UMD?

Okay. What was your hometown?

How would you describe your life prior to enrolling at UMD? When I ask this question, I’m thinking about family composition, home community, and that kind of thing.

I was an artsy, fartsy teen. I was a slam poet. I was ripping and running and doing things that I shouldn’t have been doing to be honest with you–underaged New York City kids stuff. I grew up in a home with a mom, a dad, my sister, and ultimately her four kids–a multi multi-generational home. We’re immigrants, so you don’t leave the home until you’re married–that sort of thing. Once I left for UMD, that’s when everybody sort of fended for themselves. I’m a subprime mortgage lending crisis survivor. That happened in ‘06–the year I graduated. I wound up staying in DC proper  for eight years,and I just really immersed myself in a community in DC proper before coming back. Artsy, fartsy kid growing up in Brooklyn, with my big extended family in one house. I did the compulsory church thing until I got to college and stopped, you know?

What was your parents’ background? I know, you said they’re immigrants. So were they born in Panama?

What do they do for a living?

My dad is a machinist by trade, and my mom is a teacher.

Was going to college like a foregone conclusion? What was your family’s view of higher education?

It’s  interesting, because  I’m definitely a millennial elder born in ‘84. I was in UMD ‘02-’06. We got caught up in the school debt is good debt entrapment mantras, if you will. My sister’s 10 years my senior. “Your sister’s really the last of the generation that can get away with not having a degree” was my home and immediate community socialization, but I can’t say that there was any real pressure or it wasn’t a foregone conclusion in the home.

I’ll be honest with you, I wanted to leave New York for a little while. I knew I did not want to go to any of the upstate schools. Maryland gave me the best financial aid package at the time. Before Ehrlich became governor, they had kept tuition increases at 1.5% every year. I was expecting to come out with a certain debt load, but while I was there, my tuition went up over 40%. I was already over halfway done. If I come back, I lose all these credits and probably come out with the same amount of debt or just a little less, so I just stuck it out, took out the loans and came out with double the amount of loans that I expected.

And you said you enrolled at Maryland in 2002.

How did you choose your major and what was your major?

I was a psychology major. I took AP Psychology as a sophomore in high school. I was in the humanities program, so I came in with high school credits before I even started high school. I was able to bypass physics. I was like, “Yeah, put me in the AP stuff that I care about.”  At the time, I thought I wanted to be a social psychologist and do actual metasocial psychological research. Maryland considers psychology a science and not a liberal art. I was like, “Oh, okay, This is cute” but actually, we’re lumping you with biology. I was like,”Alright, so y’all really take this seriously.” You have to take stats as a psych major, whether you got a BS or a BA, it didn’t matter. You have to take two stats classes, I want to say, as part of the major.

Is psychology the major you graduated with?

Walk me through your memories of the first time you walked onto the campus as a freshman.

I actually did  the weekend stay in August three weeks before we moved in. I was like, “Oh gotdamn, this is college. This is like National Lampoon’s. Like out of the movies. CO-LLEGE.” Their local bar strip.When I started, Maryland had just won, it was the Juan  Dixon years. I don’t know. I  get age-fished with us. You know what I mean? I’m not even going to start to presume what your era is.