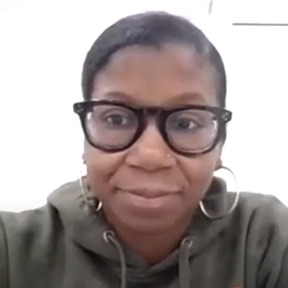 “I thought our BSU executive board at the time  did a really good job along with the art and music committee we had with bringing different concerts and events that were also applicable and of interest to us. There were numerous concerts. Anywhere from John Legend to Kanye West to Nappy Roots to Common– we had a lot of entertainment that came, so it felt connected. Even though I was at a PWI, I didn’t feel like I was shortchanged in the Black experience at all during my time there–at least from that perspective.”

NARRATOR BIO: Patricia (Adams) Nasir came to the University of Maryland in 2003 from Philadelphia, PA and graduated in 2008 with a degree in Finance. Nasir went on to work at JP Morgan Chase and continues to work in the finance sector. While at UMD, Nasir was a member of the Black Business Association, a resident assistant in The Commons, and a participant in Beyondf the Classroom.

Okay, so my name is Francena Turner and I’m conducting an oral history interview with Patricia Nasir on February 11 2022. Was this your last name when you attended?

It was not.  I was under the last name. Adams is my maiden name.

How would you describe your life prior to coming to the university? And by this,  I mean, family composition, thoughts on higher education, your home community, and that kind of thing.

Yeah, absolutely. I’m a first generation college student. My mom never attended school or college. She was accepted, but didn’t have the support in order to go. My Dad attended some college via the GI Bill and so forth, but didn’t graduate. So myself and some of my siblings that did go to college, we’re the first generation to do so. I did grow up in a two parent home, where I would say the expectation was that I was going to college. It wasn’t, “Hey, if you don’t want to go to college, you can do this or you can do that. It was “Here are the steps we’re going to use to go to school.” So that’s kind of what I’ve always had in my mind.

How did you make the decision to attend Maryland?

One of the things that I did in selecting schools is I looked at places that I would want to live afterwards. That allowed me to apply to some schools in-state, although I wasn’t really keen on that, apply to  some schools in Virginia, and then the University of Maryland. I ultimately decided on it because it was far enough where I felt independent, but still close enough to home–it was only like a two and a half hour drive, should I need to get home for anything.  My visit and my experience at the University of Maryland really excited me to say,  “Okay, this is the campus for me.” That experience was a multicultural overnight stay  program that they had. I just loved the whole experience. It made me want to come on board full time.

How did you go about selecting a major?

Great question. I remember this now.  When I initially came into University of Maryland, I had every intention of being in the medical field. My first semester was filled with a few science courses. I remember I was taking chemistry, and I really wanted to be on the path of being like a physician’s assistant–except chemistry was not my ministry. After the first semester, I was like, “Forget this. These are not the grades that I’m used to. This is not what I expected. I don’t think this is a path for me.”  During my second semester, I decided that I wanted to do business. It seemed like it would be kind of a good thing to kind of fall back on and then I just really liked finance. When I looked at the business school, I wasn’t really a marketing person or accounting. That’s how I wound up narrowing in on the field of finance.

You mentioned that you visited the campus initially as a part of that overnight program, but can you walk me through your earliest memories of the college as an incoming freshman?

Yes. When you say memories, what are you looking for? What are some of the things that people have shared?

Just things that stuck out to you, for example, there are people whose earliest memory is the massive size of the institution, or it might be a smell.

I would say it was really when I moved into my dormitory. I think for me, that’s what made it really real in seeing all of the other students that were in the dorm, and that like this was going to be my home, not for a night, not for a summer,but for the next four or five years. So I was in. It’s really my most vivid memory of my parents moving me in and that whole hustle and bustle that comes with moving into your dormitory and so forth.

Did you live on campus the entire time you were there? And if so, do you remember the residence halls you lived in?

Yes. I did live on campus the entire duration. For the first  two years I lived in Caroline Hall. I think it’s still there. Now. I don’t think they are not available yet. I’m not sure. And then the next three years I lived in the Commons. I lived in buildings 1 & 2. My last year and a half, I was an RA. For one of those buildings.

While you were at Maryland, did you belong to any campus based organizations? Be it social organizations or civic? Or maybe depending on your major?

Yeah, absolutely. I was a part of our BBA-the Black Business Association as well as the BSU. I was also a part of the Beyond the Classroom program that we had that also kind of corresponded to the RA position that I had.

But could you tell me more about that organization?

Beyond the classroom was one of the civic programs that the University of Maryland offered then or maybe still does.  I’m trying to think what the other one is that they have for engineering students. It’s escaping me at the moment, but that really focused on civic ties.  We did some things in the community, but also, how can we tie that back into being a better resident assistant to our residents in the dormitories?

Did you belong to any organizations, clubs, or anything that were off campus based?

I did not. Not at that time.

How would you describe general race relations during your time at Maryland?

I would say general race relations were okay. During my time, and especially my freshman year, I don’t think anything really stood out to me that was different.  There were some groups of people, whether it’s white students, or our Indian students, or African students,  there were mixed groups, basically. But then there were some that just kind of kept to their own students that were similar to them. But I don’t ever recall any racial issues, or what have you during my  earlier parts of being at Maryland. I do feel like there was a racial incident, whether it was in my  junior year, but honestly, I can’t remember what that was.