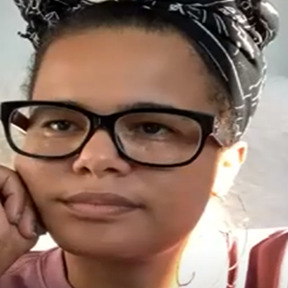 On making the most of her time at UMD

“The university has so many resources that I feel I go untapped, and everything does not have to be labeled Black for you to take advantage of it. You pay your tuition. You are there. You belong there. I was at Maryland on a full scholarship, and it was not for diversity, you know what I mean?  A full academic scholarship. I think that I probably felt a sense of entitlement to everything that the university had available like, “No, I’m gonna take advantage of this.” When they had guest lecturers, when they had different speakers and events, and even when you could do the thing where you call a ride to get a ride back–any and everything that’s available–I’m taking advantage of it. I’m using every dining and meal point I’ve got. I think that’s the biggest advice that I would give folks. Take advantage of everything that the university has available to offer and use it as an opportunity to get outside of your comfort zone a little bit.”

NARRATOR BIO: Shannon Jones came to the University of Maryland, College Park from Baltimore Maryland in 2001 and graduated in 2005 with a degree in Communcation and a certificate in African American Studies. Jones’ career has been in marketing, and she is a co-founder of Verb, a California based marketing and consulting firm. While at UMD, Jones was active in the Black Student Union (BSU), the Black Aliance Network (BAN), Campus Mentor Bigs (CMB), Student Events & Entertainment (SEE), the Dean’s Advisory Council, Omicron Delta Kappa, and Dimensions Modeling.

My name is Francena Turner and I’m conducting an interview for the Reparative Histories oral history project entitled the Black Experience at UMD. And this interview is with Miss Shannon Jones. Ms. Jones, was Jones your last name while you attended UMD?

No, it was Simpson.

Shannon Simpson. Can you tell me the years you entered and exited the university?

How would you describe your life prior to coming to the University of Maryland in terms of family composition, home community, and those kinds of things.

I lived in Baltimore County with my mom and stepfather. I lived in Maryland, probably since fourth grade. I was very active in every single student club you can think of–sports, Student Government, extracurriculars. I probably did over 1000 community service hours, and the graduation requirement was 75. Very active in the community. There were a couple of people from my high school that had gone to Maryland the year prior. That was kind of how it was on my radar. I mean, I always knew about it, just from living in Maryland, but when a couple of my friends had gone the year before, it had me more interested in deciding to attend the Univertsity of Maryland.

Can you tell me a little bit about your parents, your guardians background?

My mom is from Jersey. She moved to Maryland when I was in fourth grade. Her job brought her there and she didn’t really have much family in the area. My godmother, I think, might have been the only person at the time that she knew in Baltimore. All of her family was in Jersey. so that was probably a big transition. Especially in Baltimore, where it seems like everybody’s from Baltimore–your auntie, your grandma’s house. Everybody lives there. Multiple generations have gone to high school there. I think that was very different. Not having that foundation or network already built in, you’re really having to build that. Then she married my stepfather when I was in ninth grade, in high school. They had been together since I was in elementary school, but they got married when I was in high school. My mother worked in insurance at the time. My father was in IT and then went to culinary school while I was there.

You mentioned that part of what put the University of Maryland on your radar was that students who went to your high school graduated from there. I have a two part question. One, what was your high school? Two, did you apply to other institutions? Tell me more about your decision process to attend the university.

At the time, no one had graduated from Maryland yet. They were a year ahead of me. They were freshmen at the time. I had applied to NYU. I don’t actually think I even sent in my application from Brown. I knew I didn’t want to go there, but it had been recommended to me for communications. Then I got a scholarship to–there was another small HBCU that had selected a bunch of students from Baltimore, and they had gotten full scholarships. I did go visit NYU. I did not like it. I think the city as your campus was a little overwhelming at the time. The dorms just felt like you were in just a miscellaneous apartment building in town, and I wasn’t really a fan. At the time, I feel they were just inventing electronic applications. Some of my applications were paper, but some were online. To this day,I  don’t even remember if I actually submitted my NYU application in full. I probably started it. I just knew I didn’t want to go there. I was kind of betting on Maryland and I had really high LSAT scores and really high grades. I didn’t think it was a matter of if I would get in. It was just a matter which school that I wanted to go to. Did I want to go to an ivy league school or did I want to go somewhere close? I felt Maryland had a great reputation, so I was interested in going to Maryland.

You mentioned communication. Was that your major?

How did you choose that as a major?

I knew that I wanted to go into marketing but not necessarily on the business school side. I liked what the communications program had to offer. I feel I really had always gravitated toward mass communications. Even when I was in a magnet school in middle school, it was always about mass comm. That was really a big thing for me. That really impacted my decision. I did do a certificate program in African American Studies. I didn’t do an official minor. I took a lot of classes in the kinesiology department in sports marketing. At the time, I had actually asked my professor if I could do this create your own major program that the university had if they didn’t offer something that you wanted to do. I wanted to get a degree specifically in sports marketing, and I’d taken several classes with this professor. He said, “No, that’s too specific. You’re going to pigeonhole yourself too much. Take these classes to fulfill your requirements, and then also focus your internships in that area, if that’s what you’re most interested in. Don’t make it your major.” That’s sort of how I decided exactly what I wanted to do.

Which high school did you attend again?

Walk me through your memories of the first time you walked onto the university’s campus as a freshman.

As a freshman, I kind of feel I already knew the place because I had been up there to visit with my friends that had gone to the school. I kind of felt I had my bearings a little bit more than probably a lot of other folks had. I knew where my dorm was. I can remember moving day; my best friend from high school also went to Maryland at the same time as me. I wasn’t very proactive about meeting all the neighbors because I’m like,” I’m gonna go to my best friend’s dorm when she gets settled.” I had quite a few friends from high school that were already there. I feel like having that built in network also made me feel very comfortable very quickly. I think I might have even done one of those summer orientations where you got to meet older upperclassmen, and they will talk to you about the school. One of my best friends–this is so funny–told me to go to the first orientation of the summer so that you could get your college ID, and then you could have it all summer and go out. That was the best advice that I got right before my freshman year because I went to the very first orientation weekend. I got my ID, and then I was just able to have a free fun summer before school going to college night and the parties. I was only 18.