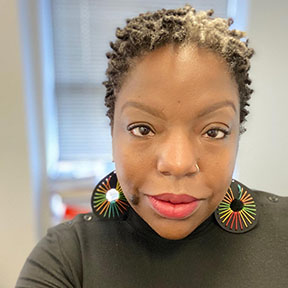 On racial awareness after studying abroad

“One thing I do remember is I got the chance to study abroad when I was in school, and I went to Ghana. When I got back, I had a really hard time.  I would play this game in my head; it probably wasn’t productive. I would count the number of Black faces that I would see while I was walking in between classes. If I got to 10, I would start over, but rarely do that happen. So that was tough for me.”

NARRATOR BIO: Courtney Hinton came to the University of Maryland, College Park in 2002 from Bowie, MD. She graduated in 2006 with a degree in African American Studies. After working in operations consulting, Hinton took an entrepreneurial path and now does operations consulting, graphic design, and video editing. Courtney is also a recording artist. While at UMD, Hinton was active in the Saurday Freedom Schools Program, the Resident Hall Association (RHA), and the National Association for the Advancement of Colored People (NAACP).

My name is Francena Turner and I’m an oral historian conducting an interview with Miss Courtney Hinton for the Reparative Histories and the Black Experience Oral History Project at the University of Maryland. Was Hinton your last name when you attended the university?

My hometown was Bowie, Maryland.

How would you describe your life prior to enrolling at the University of Maryland in terms of family, home community, things of that nature?

I lived in Bowie with my parents and my younger brother. I was the oldest of two siblings. I would say we were tight-knit. I was going to high school–bussed away–30 minutes from my home to Central High School for the IB program, the International Baccalaureate program. It was a very small school. My graduating class was maybe 200 people. I grew up in Prince George’s County, which is a predominantly Black county, and known for being, at the time, the wealthiest Black community in the country. My school was a reflection of that, but not necessarily my town. It was starting to become more predominantly Black. Bowie was historically a white area.

Sure. My parents actually grew up in Mississippi. They moved to the East Coast when my father attended Howard University Law School. He graduated in 1980. My mother, her professional background is that she’s a registered nurse, but she also went on and got her MBA. So she hadn’t done clinical work in a long time. At the time I graduated high school, I don’t think she was working. I think she took a couple years off; she’d gotten sick.She took a couple years off, so my father was the only one working at the time. He was working and he still works now as Senior Counsel for Geico. My mother had been working at the Washington Hospital Center, and she’d been working there my entire life. That’s where I was born, but she was not working when I graduated high school and started to attend college.

I’ve been thinking about that today, Just about the lack of nurturing I got in terms of deciding on a college and deciding what to major in. I had attended the inaugural Maryland Governor’s Institute for Technology the summer between junior and senior year. We spent five weeks on Maryland’s campus that summer, and I fell in love with the campus and I had a great time during that program. Maryland became one of the schools that I applied for–I think I only applied to three schools. I applied to the University of Maryland, Baltimore County, University of Maryland, College Park, and University of Southern Mississippi because that’s where my parents went. I got accepted to all three. I don’t know why I didn’t choose UMBC, but I knew I didn’t want to go to Mississippi. I just applied because my parents told me to. So Maryland became the top choice.

What year did you enroll at University of Maryland?

How did you come to choose a major?

Well, I thought I was going to go into doing computer engineering or computer science, but I did not test into the math part. I came in as a Letters and Science freshmen. I stuck with that until I had to declare at the end of my sophomore year. My experience on campus is really what pushed me into the major that I chose ultimately, which was African American Studies. It was really challenging for me that first semester going from my small school that was majority Black into this huge institution and not having the confidence, not having the nurturing, not having a lot of things that I probably should have had to do well, but my African American Studies courses that I took were the places that I felt most at home, and I did the best.  I decided to declare that major.

Thiis question is really about your first time on campus as a freshman, but you had been on the campus as a part of another program, walk me through your earliest memories of being on the campus.

The first time I hit campus, I remember it being very big. I will say one of my first memories, and I’ve had several of these experiences since I’ve been there, was during that summer program when my father was moving us in. He got a parking ticket. I had several of those over the five years that I did. So I remember that for sure. I remember the campus being very big. I just remember it being big. I grew up in the county, but I never had a reason to go to the campus before that program. Freshman year, I stayed on campus, but I had a class that was a 30 minute walk from my dorm.

All on the same campus?