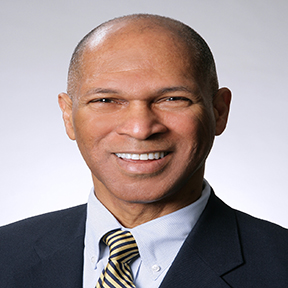 “My entrance wasn’t really hospitable at all. I found that the institution, as a whole, wasn’t bad, but there was certainly racism in some of the faculty and in some of the professors. I went there to study accounting, which was in the College of Business and Public Administration. I had my freshman advisor who said to me, “you don’t belong here, you need to go to a junior college.” Well, my parents worked really very, very hard to send all three of us [to college.] We were not rich, and they had to make sacrifices. So it was really disheartening to me as a first semester freshman to have my advisor tell me that I didn’t belong there, you know.”

NARRATOR BIO: Maurice Dorsey came to the University of Maryland, College Park from Forest Hill, Maryland in 1965. He graduated in 1970 with a degree in interior design. He earned master’s degrees from both Johns Hopkins University and Loyola University of Maryland.  He later returned to UMD in 1979 as a graduate student and earned his doctorate in Education, Policy, Planning and Administration in 1983.

Dorsey worked at the University of the District of Columbia in Cooperative Extension Services for twenty-two years before taking a post at the United States Department of Agriculture (USDA) in 1999. In this position Dorsey led the Association of Public & Land Grant University (APLU). Dorsey retired after a 42-year career in 2011 and is now a published author. His books include Businessman First: Remembering Henry G. Parks, Jr, 1916-1989 Capturing the Life of a Businessman Who Was African American, A Biography (2014), From Whence We Come (2017), Of Time and Spirit: A Tribute to My Father (2020). He is currently working on a book about his mother’s life. In January of 2002, Dorsey made a generous $50,000 commitment to create the Maurice W. Dorsey Ph.D. and Robert J. Battjes D.S.W. Endowed Scholarship for Student Success at UMD.

My name is Dr. Francena Turner and I’m conducting an oral history interview with Mr. Maurice Dorsey for the reparative histories, the Black experience at University of Maryland Oral History Project. Mr. Dorsey, can you start with telling me what years you entered and then graduated from the University of Maryland?

So you were both an undergrad and a graduate student at the University of Maryland?

Yes, for undergraduate and my PhD.  Then I earned two different masters degrees – one from Johns Hopkins University in Baltimore, and the other from Loyola University of Maryland, Baltimore.

What year did you earn your PhD?

What was your undergraduate major?

My major was interior design in the College of Home Economics.  That wasn’t what I originally planned to study. When I entered in September of 1965, I planned to study Business and Public Administration and major in Accounting.

And what was your PhD in?

My hometown is a really small town called Forest Hill, Maryland. It’s probably closest to the county seat in Bel Air, Maryland.  Baltimore City is my dad’s home. I spent a great deal of time in Washington DC, my mother’s home. So I spent a great deal of time in the Baltimore-Washington, DC area between my mother’s and father’s hometown. But I actually grew up in a military base which at the time was called Edgewood Arsenal. Now it’s called Aberdeen Proving Ground.  I was in a military environment for maybe the first 10 years of my life. Then my  dad came out of the military, and they built a home in rural Forest Hill, Maryland. So I grew up in a rural environment, a conservative environment, a military environment, and pretty much a segregated environment.

Which high school did you graduate from?

I graduated from Bellaire Senior High School. It was a happy experience, but I didn’t enter until 1963. That was 10 years after the Brown vs Board of Education, Supreme Court ruling. My county was (almost 10 years after the fact) integrating the school because some residents of the county weren’t ready for integration.  The school superintendent wasn’t ready for the conflict that would arise. So I didn’t actually enter the high school that I graduated from until 1963/64 for 11th grade and 1964/65 for 12th grade. I was technically there just two years. And prior to that, I went to the central consolidated school, which was the segregated Black school and the southern part of the county. We had two consolidated schools in the county, one in the north and one in the southern part of the county. I went to the one in the southern part of the county and everyone who was non-white went to the consolidated school. We had a number of mixed race families at that time. There was plenty of diversity. Because the soldiers on the military base where I grew up came back from World War II or the Korean War brought back wives from the Philippines, Taiwan or Japan. They had mixed race, children and so everyone lived in this segregated housing community. On military property, and for Black people at that time, it was not considered really dead. Plus, we had military security on the property. We rode a military school bus to school, which was approximately 15 miles. By the way, I’m a big talker, so just cut me off when you need to.

No, because usually I ask the question, “Tell me about your life prior to UMD.” And you’re giving me those answers before I ask. That’s why I’m just listening with open ears.

Well cut me off. Because I’m 74 years old. I’ve written and published four books in my retirement. I’ve kind of reviewed my life a great deal from my beginning years, all the way all the way through until the present. As I was saying, diversity, as we talk about it today as sort of a new issue in the past 10, 15, 20 years, was not an issue for me because I grew up with Hispanics and Puerto Ricans, and Filipinos, Black and white marriages, and mixed race marriages. The few officers that were in the  military at that time, we all lived in the same community – the poor and the rich, the middle class – we all lived together in a segregated community. It was for the most part harmonious. Like in every community, there are some differences and disturbances. But I think by being on military property, we had the military police driving through the residential areas every hour. When we went to the movie, we got on the Army bus.  When we went to school, we got on a military bus.  We were the only camouflage bus and all the other school buses were yellow. Yellow school buses that were traditional for public schools. My experience with diversity wasn’t really a big issue for me, because I had grown up with it. Not that we were like bosom-buddy close friends going in and out of each other’s homes. But I mean, we were certainly exposed to it. And then when I went in 11th grade to the integrated school, I was the only African American in my class of 460 seniors. So the transition for me was not as difficult as it was for other children of color who followed me  because I had had that military experience and military background where I was exposed. I wasn’t afraid of white people. And I’ve always been friendly. I was never a discipline problem or a problem child. The teachers didn’t have to call my parents for anything, so that wouldn’t have been an issue. The issue for me was academic, which was actually the exact same problem I had with the University of Maryland. The integrated high school that I attended was 10 times better funded and resourced than the segregated Black school. The Black school we had used textbooks, used desks, and used furniture.  Everything that had been left over from the white schools came to the consolidated Black schools. When I went to Bel Air Senior High School, I had to really play catch up in the language labs. I took French and chemistry labs.  They had so much equipment in the business labs where they had adding machines and electric typewriters where in desegregated schools, we had just the manual typewriters. When I was in chemistry class, we had maybe one frog for 10 people.  Ten students standing around to dissect., whereas when I went to the integrated school, you had your own frog. You had to do it yourself. It wasn’t group learning. I had to do a great deal of catch-up academically. And because I had more or less been behind for 10 years, I was pretty much an average student. I wasn’t a scholar, but I was friendly. I was social. I got along. One of the joys of school–again, I was just a solid C student, the academic average. Part of that was behavior–personality and being able to get along and not being disruptive, and having good attendance.  I mean, I always went to school. But when I went to College Park for undergraduate school, at that time, we had 30,000 students including the commuter population. And that was more students that were in this little town that I went to.  It was just huge. I mean, it was just an absolutely huge gap from the small town where I went to school and the University of Maryland as an institution.  Compared to the historically Black colleges, it was a very well funded institution. The chairs, the tables, the books, the laboratories, the classrooms, the resource materials were all 10 times better than I had ever been exposed to in the rural county that I had gone to. But I must say that after I graduated, it was a positive experience for me to graduate and to be exposed because it gave me even a wider lens of diversity in the world and geography of where people came from and where they lived.