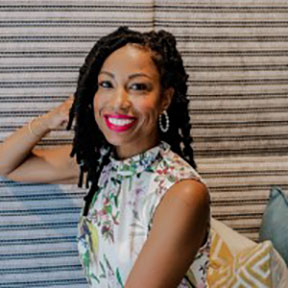 On what she remembers most about UMD

“The bonds that I made, honestly. I often will tell people who aren’t familiar with it, or especially people that went to HBCUs, that I feel Maryland had its own little HBCU, because we had enough Black students to make up what the average size of an HBCU is. I felt I had a Back experience, even though it was a predominantly white college. Definitely, the people that I met, and the network is still now helping me to advance in life 15 years later.”

NARRATOR BIO: Patrice Owens came to the University of Maryland from Baltimore, Maryland in 2003. She graduated in 2007  with a criminal justice degree. After working for twelve years in retail, Tillery is now an entrepreneur. She is a licensed real estate broker and an event planner. While at UMD, Tillery was a member of the Black Student Union and the National Society of Black Engineers. Tillery is also a member of Alpha Kappa Alpha Sorority, Inc.

My name is Francena Turner and I’m conducting an oral history interview for the Reparative Histories: The Black Experiences at UMD Oral History Project with Ms. Patrice Tillery. Am I pronouncing your last name correctly?

Was Tillery your last name while you were at the University of Maryland?

No. My last name was Owens.

It was Patrice Owens.

Okay. And what’s your birthday?

Okay, how would you describe your life prior to enrolling at the University of Maryland?

How would I describe my life? It was a mix of privileged and not. I would say I grew up in a single parent household. My father lived in Chicago from the time I was four until now—moved away early. I saw him regularly, which was probably like twice a month. But single parent life was normal to me, Most of my friends were in single parent households too. It probably was in high school before I realized that that was abnormal, or should be abnormal, if you will. I went to private school my entire life, particularly for high school. I went to a relatively competitive or elite, private high school. I would say that I had a good life, but definitely not your typical quintessential American upbringing.

Can you tell me a little bit more about your parents or guardians backgrounds and sort of their sort of philosophy on the education?

Absolutely. My father actually went to University of Maryland College Park. My mom went to Towson University, but did not graduate, My father did graduate from college. I was not a first-generation college student. I grew up my entire life where education was important. College was always just expected. It was never optional. There was just always what was happening after high school. Education is very important. I got good grades from a young age, and it was always celebrated. Always. It was kind of a big deal. Definitely made to seem like it was my primary focus to do well in school.

It was my last choice; I wanted to go to Tulane. That was my first choice. I did not want to stay in Maryland. I applied to schools in New Orleans and in Atlanta, I applied to six schools, if I remember correctly. I got into three, didn’t get into one. I can’t remember which is which. I got waitlisted at one. I did get into Tulane, which was my first choice, but it was very expensive. Then they gave me almost no financial aid. I ended up going to University of Maryland because of finances, basically. I didn’t make the decision; my mother made the decision for me.

What year did you enroll at UMD?

How did you come to choose your major?

That was a journey. I was initially a math major because it was my favorite subject. I really enjoy math. And I was a math major until my junior year, until we started moving away from mathematics and more into like proof writing, and more theoretical mathematics and it was just not my cup of tea. My GPA was bad too. I had always gotten really good grades. I think part of it that was a mental struggle for me is how hard it was for me. I was putting in what I felt like was a good effort and not getting results. I ended up changing my major to Criminal Justice and graduating with a criminal justice degree. But also, a lot of that was me wanting to graduate on time and me choosing something that I could graduate on time with, because honestly, I didn’t know what I wanted as a career path. I had no idea, so I was just like “Well I’m just gonna do something so I could graduate because I don’t know what I want to do anyway.” That’s how I ended up with the major except that I also had a minor in Spanish that I kept.

Walk me through your memories of the first time you walked through the campus as a first-year student.

The first time I remember walking on campus is actually when they had the overnight stay program. I met my first friend. We ended up being friends through college. But as I think about when I actually enrolled, my first memories were how big it was, that the dorms were not as big and the campus was huge, and that it was just going to be an entirely different experience. I had never slept in a twin bed. So that was a thing too.

You lived on campus. Which residence halls?

I lived in Hagerstown for my first two years, and I lived in the Courtyard for my second two years. Okay.

Did you belong to any campus based social organizations or clubs? If so, what were they, and did you hold any leadership positions?

I was in the Black Student Union, that was probably the first thing that I did. I did not hold any leadership positions there. I also was in Alpha Kappa Alpha Sorority Incorporated. I don’t remember what I did there specifically, but I had multiple roles. I also was in the National Society of Black Engineers (NSBE). I remember doing a few other things. I can’t remember them all. But yes, I was involved on campus.