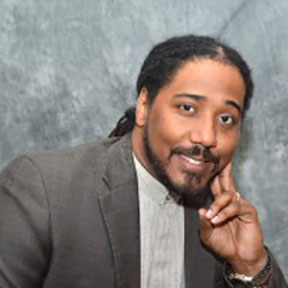 “…because there’s a lot of ugly stuff out here, we know this. We confront it. We challenge it. We deconstruct it. We rebuild it. That’s what we do. At the same time, we got to remember to celebrate, too. We got to remember to be nurtured and to be lifted up by all of the beauty that happens in spite of this ugliness. And for me, that’s what made those years still something I look back on with a sense of serenity now, and a sense of feeling really grateful and very fortunate to be able to have connected with people…To this day, some of those relationships, I still have them.”

NARRATOR BIO:  Rahman Culver came to the University of Maryland College Park  from Takoma Park Maryland in 1996. He graduated in 2001 with a degree in African American Studies. Culver went on to earn a Masters in Public Administration from George Mason University in 2009. After working for several years in the nonprofit sector, Culver earned licensure in secondary social studies and   special education. In addition to teaching, Culver is the Diversity and Inclusion Instructional Coordinator for Montgomery Blair High School in Montgomery County.  While at UMD, Culver founded and served as the program director for the Saturday Freedom Schools Program through the African American Studies Department. He was also a leader in the Society of African American Studies and the editor-in-chief of the Black Explosion.

[0:00] Francena Turner: My name is Francena Turner and I am conducting an oral history interview with Rahman Culver for the Reparative Histories and the Black Experience at UMD Oral History Project. Mr. Culver, let’s begin with some background information. What’s your hometown?

[0:18] Rahman Culver: My hometown, I would say, is Takoma Park, Maryland. I grew up for most of my childhood years there, although I was born in Washington, D.C.

[0:35] Francena Turner: How would you describe your life prior to enrolling at UMD, in terms of your family composition, your home community, and their thoughts on education?

[0:48] Rahman Culver: I guess I would describe my experience as a well-exposed one. On my father’s side they’re Washingtonians for the most part. My father grew up most of his years in Washington, D.C. His mother, my grandmother, spent a lot of her adult years in D.C. She was born in New York, spent some time in Virginia. So we’ve been in and out of the Washington D.C. area for all of our formative years. So with being in D.C., it’s always been a cosmopolitan area, obviously. It’s right by the city government. So my childhood was spent kind of having this dual consciousness of not only being someone who came up locally, as a person in a relatively culturally and ethnically diverse area, but also growing up in an area that is the seat of power for the entire country and, of course, is pivotal on an international stage.

So it was very interesting to grow up with that dynamic. And with that, of course, Washington D.C., it’s adjacent to Virginia and Maryland. We don’t talk about it as such here so much, but it is the South. (laughs) Washington, D.C. was segregated. So my family stories kind of seeded with those narratives. What it was like to work in segregated D.C. What was it like to be the first family to integrate my father’s neighborhood, for instance. They lived on 16th Street and Upsher for many years and prior to them moving in there were no Black families in that community. So a lot of my consciousness was shaped by those stories about what it was like to grow up as a Black family in this area. Like I said, even though it’s seen as this progressive cosmopolitan area, it’s still subject to a lot of those forces due to segregation and racism, prejudice, and so on. It just gave me that lens as I grew up.

I went to school in Montgomery County which, comparatively speaking to a lot of areas around the country, it’s one of the more diverse areas in the nation. So I was able to kind of get a sense for what it’s like to engage with folks who come from a different background, different belief systems, different origins, and that was normalized for me even from a young age. I would say by the time I got to high school age and ready to go off to college, a) I wanted to go somewhere that had a similar environment, similar dynamics, similar cultural feel to it. So University of Maryland was a good fit, obviously, because it’s right here in the heart of Prince George’s County. It’s the seat of some of the greatest Black wealth in the country. We don’t talk about that enough. So it was nice to go to the University of Maryland. University of Maryland is diverse even though the representation of BIPOC, or people of color, is not that great by the numbers. We’re always trying to explain it to our children, the representation of Black folks it’s traditionally around 10% attendance, somewhere about that. That doesn’t sound like a lot. Our demographic share of the country is higher than that. But if we’re talking about a massive institution, talking about tens of thousands of students, 10% of that’s still a lot of Black bodies. (laughs) So it was nice to go to an institution where there are a lot of people there but you still could find a niche for Black community and Black action. And a space for that alongside of Latinx folks or Asian folks and so on. I arrived at Maryland,being the sum of these experiences to that point, where I did have exposure to different folks. I’d been used to dealing with some of the ignorance that comes with some of our white brethren who are not as exposed. (laughs) Not as used to coming up around different folks. So it wasn’t like I arrived in Maryland, and I started getting these weird comments, or we call them microaggressions now. It wasn’t as if I was shocked, “Oh, my gosh!” (laughs) “So and so says such and such!” We’ve had some experience with this. And it doesn’t make it any less marginalizing, but I felt like I was at least equipped to try to find my path and to be able to navigate that and get what I needed or what I wanted out of that university despite some of those undercurrents.

[6:44] Francena Turner: Can you tell me a little bit about your parents or your parents’ background? In your family was it a foregone conclusion that you would attend college? Were you first gen?

[6:59] Rahman Culver: Yeah, you did ask about feelings about education. So the short answer is, yes, it was a foregone conclusion that education was a way forward for us. Not only we as their children, but as Black folks in general. My paternal grandmother, she was very trailblazing even for her time as far as holding up formal education as a way forward even for Black women. So she went to a variety of trade schools, was very adamant about belonging to professional organizations. She was a member of Top Ladies of Distinction for many years, (laughs)  which was, I would say, sorority adjacent, that type of civic organization. And yeah, she set the expectation that formal education was the most reliable tool to social upward mobility.

My father, he grew up being able to enjoy some of the fruits of living in a neighborhood like Upsher Street. Now, we have an entirely different conversation about (laughs) how that played into some of his identity struggles. (laughs) I’ll say this much, he had a lot of opportunities that were in line with what was taught: pursue education, find ways to be competitive, to be able to establish a career for yourself, etc. He had access to all of these things, even in segregated D.C., because my grandmother and her husband were well integrated. They were part of that intelligentsia of the area. They were both very fair skinned, even. They passed on convenience. They had that level of interaction and an access to networks. Despite all of that, my father rebelled. (laughs) He said, “Well, I don’t like this world. I don’t like all of the,” what he would say, “bourgeois experience for Black folks” at the time. So he sought out opportunities to be militant and to, in a very overt way, push back against some of that messaging and some of those values. So my point is, it was a very interesting dynamic for me, because my grandmother sought to provide me with these experiences, these teachings. My father was very much aware of it and he wanted it for me as well, but he didn’t do it himself. (laughs)

So, when we talk about first gen, it’s complicated sometimes. I was technically the first person in my family to earn a four year degree, but I was not the first one to attend institutions of formal learning and whatnot, or post secondary, I’ll say.  So in that regard, the expectation was, yes, you do this, but it was not necessarily the path that everybody walked in the family. So I was celebrated as the person who actually like, “Oh, you finished. You actually followed through.” (laughs) But I was not the only person who valued it, I’ll put it like that. My mother’s side of the family, she’s from rural Tennessee, small town an hour or two outside of Memphis. She came from a large family, ten siblings total. They had a very agriculture and industry based existence. Like, everyone in the family goes to work in the factory, the town factory. That’s what you do.