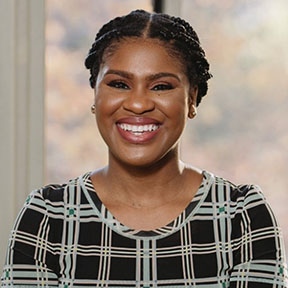 On the salience of relationships

“I think relationship building is so important. As you can see, I did not remember any of my professors names, but I remember all of the friendships and the people that I formed relationships with during my time there and so finding community on campus is so important, whether it’s through an organization or friend groups. Really, really investing in that just as much as you invest in your education because those relationships will sustain you through life.”

NARRATOR BIO:  Shakira Hill Taylor came to the University of Maryland, College Park from Brooklyn, NY in 2003 and graduated with an English degree and art history minor in 2007. She earned a master’s degree from Georgetown University in Integrated Marketing in 2010. Taylor has been  a digital strategist for over a decade. She is currently the Chief Digital Officer at  Fenton, a public relations firm. While at UMD, Taylor was in the Black Student Union, the Caribbean Student Association, the Multicultural Student Association, and the Honors Program.

This is Francena Turner conducting an oral history interview for the Reparative Histories. Black Experience at UMD Oral History Project. Was Shakira Hill Taylor your name while you were at UMD?

No, it was just Shakira Hill.

My hometown is Brooklyn, New York, and I live in Washington DC now.

When is your birthday?

How would you describe your life prior to enrolling at the University of Maryland?

I would say it was a little bit of a mixed bag. I definitely came from, I guess, what you would call a trauma informed background. But, also a really culturally rich background. I’m a first generation American; my family is from the Caribbean. A lot of experience with intergenerational trauma, migration trauma, but also richness in terms of ethnic and racial culture.

What did your parents do for a living and kind of what was their thought process when it came to education?

My mother was a dancer, which is actually why she migrated to the United States. She was Juilliard bound, and she got pregnant and no longer danced. She did quite a few things. I would say both of my parents were working class. So working class jobs. They were incredibly diligent about making sure my siblings and I understood the importance of education. My father, particularly both my parents, even though they didn’t go to college themselves, were brilliant scholars and very well read. Just brilliant, brilliant people. And so they knew that in America, a pathway for Black children, Black people to be able to achieve financial success or security was through obtaining a quality education. Now, that’s debatable on how true that is America–America is not a meritocracy–but for them, being immigrants, they really saw the value of their children getting an education to be able to advance beyond what they were able to accomplish.

My first year of college, I went to Hofstra. My father actually died right before I left for school; he was murdered. When I went away to school, the intention was to be closer to him. Being away while grieving was really, really hard. My mother had moved to Maryland, so I just needed to be closer to my family while going through that grieving process. I transferred from Hofstra to Maryland to have some family support.

What year did you enroll at UMD? At what point was this? Your sophomore year?

How did you come to choose a major in college?

I’m sorry, 2003 because I graduated in 2007.  I chose a major and went through a couple of trials. I was considering being a journalism major and I kept missing that journalism–I forgot what they called the test–grammar test that I kept failing by a point and you can only take it twice. When that didn’t pan out, I wanted to follow my bliss, so I majored in English and literature with a minor in Art History, because I love art and aesthetics. It felt like the perfect pairing of things, although everybody was really concerned that I wasn’t going to be able to find a job after school.

If you can, walk me through your memories of the first time you walked on to the University of Maryland as a new student.

It was expansive. I remember feeling hopeful, but also surreal. When I got to Maryland, in that first semester I was enrolled in the Honors Program because of my transferring GPA and the GPA that I acquired within that first semester. I went from having really large lecture classes to then being put into the smaller, more focused classes. I remember being in those honors classes and being a little bit overwhelmed by it because I went to public schools and was just really overwhelmed by how much more people knew. I was just like, “Why do I feel behind even though we’re all in the same program? The opportunities felt expansive, but I also felt a little bit of shame and just the knowledge gap that I had. Not because I wasn’t smart, but because of the fact that I went to a public school.

When you attended the university, what were your living arrangements? Did you live on campus and if on campus, where?

Off campus, because my mother’s house was on Route One. I could literally take the bus or a shuttle or even sometimes I would walk down to campus.

Did you belong to any campus based social organizations or clubs? And if so, which ones?